The beautiful area in the southernmost part of Goa is dedicated to a small town by the name 'Canacona'. Known for its Palolem beach and Mallikarjuna Temple, this city has more than 20 beaches that are worth exploring and are mostly uninhabited which makes this place a virgin city.

With Quepem on the North, Sanguem on the northeast, and Karnataka on the South,this town has beautiful beaches on the west where lies the Arabian Sea. The administrative headquarters of Canacona lie in the town of Chaudi which is 2km away from Canacona. 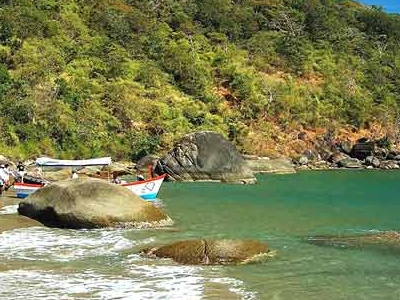 Canacona was once one of the districts of the former Kingdom of Soonda that itself was part of the former Vijayanagar Empire.It was captured by the ruler of Karnataka, Hyder Ali of Mysore.Hyder Ali later gave this region away to the Portuguese when they came to settle in Goa. It was only in 1794 when Canacona became a part of Goa .

The word 'Canacona' is a distorted version of Konkan. The latter word was derived from the Sanskrit word Konvapuram. According to a legend, the province of Canacona during the early times was enveloped with thick forests and thus became a perfect place for the ones seeking meditation. Once, a learned sage by the name of Konovmuni made a hut for himself and resided here. By his presence the land became sanctified and came to be known as Konvapuram.

Canacona located in the south of Goa has some of the best beaches of Goa. Palolem and Angoda are the most popular beaches of Goa. Canacona is also popular for its lavish wildlife and marvellous scenery. The Cotigao Wildlife Sanctuary is a must visit for for all lovers of wildlife. For more details of tourism in Canacona, click here

Comments / Discussion Board - About Canacona