The Cabo Chapel Fort is located in Canacona taluk and the west side of this fort has the sea cliffs dropping sharply into the sea and providing a lovely view both in the northern and southern directions. There are not much signs of life on top of the hill except a few soaring eagles  as well as some monkeys scampering between clusters of vegetation occasionally.

This fort is the best among all the forts in Goa although it is quite far from the usual hustle bustle and is secluded. Cabo Chapel Fort is located in Southern Goa and you will be able to view this fort when you are on the way to beach Palolem. This is a spot offering such magnificent views of the sea and bay area, the kind of views that will make you become even philosophical. 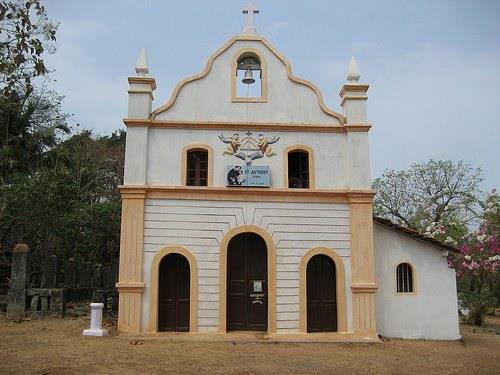 The fort area has an ancient church within it and the fort is located on a hill from the top of which the view is great. There is also a beautiful beach nearby which is very peaceful and quiet without much crowd. The Cabo Chapel Fort is the ideal place to visit if you plan for picnics or even for spending quiet time by having fun with the waves.

You can notice the ancient structure ahead of its front wall along with its old main gate and dry moat. You will also be able to see the little church standing just inside its walls and this church is being used till now. The spotless whitewash of the church contrasts outstandingly with the front rampart’s blackened stone which is ruined.

You can use the staircase leading to the beach at one of the ends of the fort and enjoy yourself at the beach. Since there are not much of transport facilities to this fort, you have to arrange your own transport to reach here.

The Cabo Chapel Fort is known by other names like Cape Rama and Cabo De Rama fort. This fort has a very interesting story behind it about how its names were derived, that is, Cape Rama or Cabo De Rama fort. It is believed that Rama from Ramayana, the Hindu epic, took refuge here with Sita, his wife during the long period of banishment from the empire and sent to the Indian forests for 14 years.

The Cape was given a finishing touch by this fort many centuries prior to the entry of the Portuguese and their wrestling of it from local Hindu kings in 1763. The Cabo De Rama fort in Goa also called Cape Rama is an ancient fort that has been situated in the cape since the ancient days. This fort was occupied first by Hindu kings who wanted to spread their reign throughout the country.

They constructed their own fortress soon after capture but it lies in its ruined form now. There is a crumbling battlement still housing a pair of old corroded Portuguese cannons and till 1955, the battlement contained a prison. At present its only building that is habitable is a single government observation station that is sometimes occupied by certain young scientists belonging to the National Institute of Oceanography. 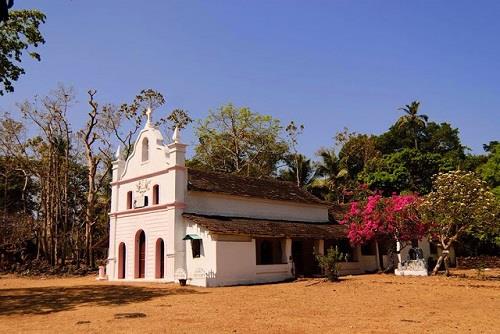 This post was rebuilt subsequently and this fort experienced no action after it was rebuilt but was occupied by the British troops for a brief period. The Portuguese conquered the fort of Cabo de Rama (Cabo Chapel Fort) after they defeated the King (Raja) of Soonda Empire and subsequently renovated it.

In ancient days, this fort has exchanged hands between the Portuguese and Muslim and Hindu monarchs and has witnessed various historical battles. The Portuguese had equipped this fort with about 21 military barracks and guns, a commandant quarters as well as a chapel.

The fort was deserted after the Portuguese people left the place and then later, the fort lodged a government jail till the year 1955. After that, it was abandoned again and today, this major tourist attraction is in its ruined form and a reminder of the Portuguese capture.

Inside this Cabo Chapel Fort, you can find the age-old church of Santo Antonio that is still in an excellent condition and also being used by followers still. The church in white and the fort in black offer a great photographic picture with severe contrast. People visit this fort just to spend time in prayer at the church and also to enjoy the spiritual atmosphere of this fort.

The cliffs dropping sharply to the waters of the sea give a scenic look to the surrounding area, towards the west side of this fortress. The fort also provides a marvelous view of the whole length of the Colva beach as well as the stretch of the Canacona region. The fort along with its small chapel inside it has a very peaceful atmosphere.

The Cabo Chapel fort provides spectacular views of the beach from the west. You must surely make it a point to visit the Cabo Chapel fortress if you look for undisturbed serenity and peace. This is also a great spot to spend some alone time in tranquility.

Restaurants and Hotels near the Fort

Cola Beach Exclusive Tented Resort is a popular hotel known for its quiet, perfect and beautiful getaway from the rush of life. The staffs are very helpful and friendly, the food is of high quality and the making of the tent is fabulous.  Sea Star Resort is another lovely resort offering deluxe beach view huts from where you can enjoy the views of the palms and the beach. The huts are very comfortable and have facilities like lockable wardrobe, ceiling fan, good bathrooms and shower, comfortable and large 4-poster beds, mosquito nets for the beds, and so on.

How to get there?

To reach this fort, move in the southern direction of Madgaon and take deviation from the NH to Karwar which is at Chinchinim. It is a bumpy and quiet road that goes to the hills at the boundary of the waters of the sea. This winding long road ends in the secluded Cabo Chapel fort. The cape of Cabo De Rama fort was a fortress even before the advent of the Portuguese to Goa.